You can’t escape the resemblance to Willie Nelson. And if you ran across Harry Butaud at a farmers market, you might assume that his get-up is a gimmick designed to sell more JuHa Ranch pastured beef and lamb.

At the ranch, Harry’s often astride a beautiful blue roan, overseeing the 850 rolling, grassy acres (some leased) near Barry that he and wife Judi Glasgow call home. (The town’s municipal building is the size of a tool shed.) Harry runs several modest herds of cattle and sheep, in addition to training horses and dogs, with the help of three ranch and stable hands.

When I arrive, he’s got both feet on the ground, ready to continue teaching a young cow dog—with the help of an older, more experienced stock dog—the finer points of working sheep. So we walk from the barn to the circular exercise track nearby.

“He just don’t have a whole lot of interest,” Harry remarks, persisting with the lesson. “The end game (for the younger dog) is show sheep.” Judges look for fit sheep, he says. “You’ve got to exercise ’em.” That will be eventually be the younger dog’s job.

By the end of the session, with plenty of praise and head rubs, young Bo’s starting to get the hang of it. “Right now, I’m just trying to get him aggressive,” Harry says, so he can build on the breed’s natural herding inclination.

Training dogs is part of Harry’s ranch regimen: Border Collies and Border Collie-Kelpie crosses to herd cattle and sheep, Great Pyrenees to guard sheep. At any given time, as many as thirty dogs may be gently tethered, kenneled or held in a puppy run in the dog area of the barn.

“I’ve always trained dogs, all my life,” Harry adds. “I mostly just trained them for myself and people who asked me. Same with horses.” 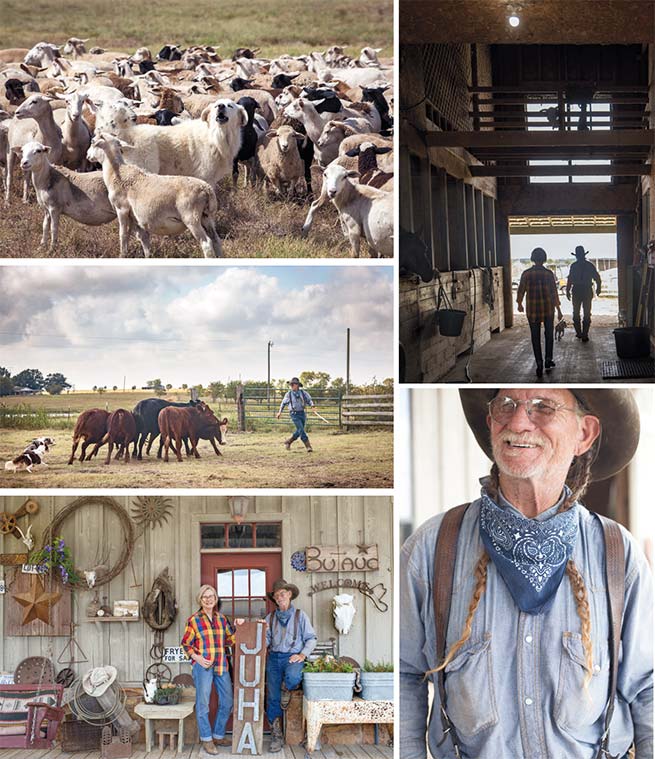 Harry is in charge of the livestock, including hair sheep and cattle. He gets an able assist from his herding dogs as well as the herd-guarding Great Pyrenees in the center of his charges (upper left). BOTTOM (from left): Judi and Harry live in one part of the barn, which abuts the stables where they keep the horses.

Harry beckons me to follow him a few feet beyond the dog area in the barn and presses his palm on the tack wall to demonstrate how it swings around, revealing a bank of saddles attached to the opposite side. It’s a lot easier, he says, to pull a saddle down off the wall than lug it through a small doorway. The day of my visit, the blue roan’s already saddled up.

“When we bought this place,” Harry says, “it was just a cotton field.” He and Judi have been living their dream at JuHa Ranch since 2000, when they bought their base cattle herd and started working the property in earnest.

“We found out we needed stock dogs to handle the cattle,” Judi says, “and one thing led to another.” Judi’s the quieter partner of the pair, with side-swept blonde hair, an engaging smile and a penchant for plaid shirts.

At the heart of the operation is its cattle, which produce JuHa’s hormone-, antibiotic- and pesticide-free, all-grass-fed beef. It took seven years to develop satisfactory genetics in their closed Devon herds (all born on the ranch except a handful of bulls), Harry says. They started selling their pastured products in 2007 at Marie Tedei’s very first Market Day at Eden’s Garden CSA Farm in Balch Springs and at a Waxahachie co-op. They eventually shifted to the Dallas Farmers Market and Good Local’s White Rock Market, where today they continue selling pastured beef, lamb and rabbit.

“In the first three years,” Judi says, “I helped build fences and sorted cattle and used to drive them to the processing plant.” She squires me around in the ATV behind Harry, who’s on the blue roan leading my tour of the property. “I wasn’t his best hand,” Judi says. They approached tasks differently, which often meant butting heads: She was methodical and precise. He just wanted to get the job done. Now they’ve evolved a mutually agreeable division of labor: “He’s in charge of the animals, the livestock,” she says. “I’m the scheduler. I’m the organizer. I do the books.”

When the three of us arrive at the butcher herd, the two dogs that Harry’s brought along show their stuff. On his command, the stock dogs race in tandem across the wide pasture, splitting up to flank some 40 cattle and corral them toward us. Once they arrive, the cattle stop and stare at us. We stare back. From this herd of 24-to- 30-month-olds, Harry will choose the next animal to harvest. The ranch also has what Harry calls the stand-by herd (younger animals) and a cow herd (mamas). 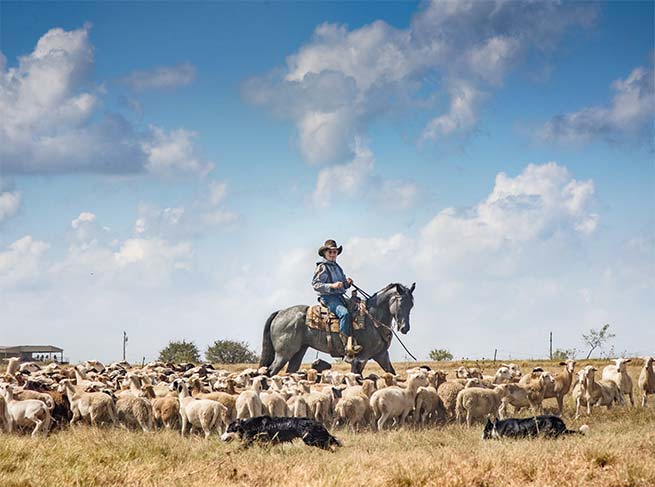 “I’ve always trained dogs, all my life.
I mostly just trained them for myself and
people who asked me. Same with horses.”
—Harry Butaud

“We don’t use any grain at all,” Harry says, to feed his charges. “We rotate them on pasture—from the day they’re born till the day they go to the processor.” If needed, he may supplement during the winter months with preserved forage, such as pelletized grass.

Leaving the butcher herd, we travel past a large pen where bouncy white puppies are getting their first lessons in guarding sheep. When their training is complete, they’ll be like the team of Great Pyrenees stationed around a herd of very pregnant ewes that we’re approaching. As important as the cattle, the sheep produce JuHa’s lamb.

“They’re hair sheep,” Harry says, “raised specifically for meat.” The guard dogs live 24/7 with the herd to keep predators at bay. The dogs will kill a coyote, Harry says, but prefer to run them off. They’d rather catch and eat skunks. “They love skunks.” And no, they’ve never gotten sprayed.

You might think that, at end of the day, Harry and Judi would gladly retreat to their own domicile, away from animals.

“Both Harry and I had visions of living in a barn,” Judi says. “When each of us drew up house plans independently, we discovered we had the same idea. And why not?” Peer through the big weathered window in their main room and you’re looking into the stables. Walk out the back door, and a left turn brings you into the dog area of the barn.

The main living space is an open, 30-by-28-foot room, with a wood-burning stove at its center. Two sides are bordered by roomy porches. Harry and Judi also have a larger “hideout” upstairs loft where they sleep. It would be tempting to call the décor something between cowboy chic and rustic kitsch, but a more accurate description might be cowboy comfort. Not fussy. Try sub-fussy.

The big room’s roughly divided into three main areas: an open kitchen, dining area and billiards area. The cowboy imprint, Judi’s doing, is everywhere. It’s so well integrated that even the dust and cobwebs in the spoke-wheel chandelier above the pool table—topped by old cowboy hats and canister lights fashioned from rusty cans—seem, simply, perfect touches. Next to the cue rack, a vintage ashtray holds the cue chalk. Nearby, a battered saddle anchors an assemblage of cowpoke tools, rope to chaps. Over the long counter that sections off the kitchen, rustic kitsch dots a rough-hewn cedar plank fitted with recessed lights: faux evergreen branches, an ancient scale, a wooden Kraft American box, an old Whiskey River bottle.

“Did you know you were going to grow up and marry a cowboy?” I ask Judi.

“Not in my wildest dreams,” she says. “I grew up in the city (in Iowa), had a career as a dental hygienist and first married an accountant. I divorced him and went overseas…. I couldn’t pass up the opportunity to experience other cultures (and) live truly independently as a single woman, learning to trust my instincts and ‘survival’ techniques.” Both she and Harry were working in the Middle East oil patch— Harry was in the equipment supply end of oil drilling—where they met in 1986.

“He was from Louisiana,” she says, “raised in the city but had relatives in the country.”

“All my family was fishermen and trappers,” Harry adds. Starting in 1996, the couple began purchasing the adjacent Navarro County land parcels that would become JuHa. They finally got around to getting hitched in 2004.

“To this day, it’s hard for me to remember the exact date,” Judi says. She just knows she chose the week of the Fort Worth Stock Show and Rodeo. “Stock show weekend, we celebrate.”

They were married at the Texas Cowboy Hall of Fame.

“She wanted pictures in period dress,” Harry says. While they were scoping it out, the marriage topic came up, and the staff said they’d be happy to accommodate a wedding right there.

“Don’t worry,” Harry recalls them saying. “We’ll get the preacher and everything.”

True to their word, he says, “they had the preacher there in a Western (outfit)—with pistols and everything.”

But Harry needed no costume. “I was already dressed right. All they did was put a gun on me.”

KIM PIERCE is a Dallas freelance writer and editor who’s covered farmers markets and the locavore scene for some 30 years, including continuing coverage at The Dallas Morning News. She came by this passion writing about food, health, nutrition and wine. She and her partner nurture a backyard garden (no chickens – yet) and support local producers and those who grow foods sustainably. Back in the day, she co-authored The Phytopia Cookbook and more recently helped a team of writers win a 2014 International Association of Culinary Professionals Cookbook Award for The Oxford Encyclopedia for Food and Drink in America.